Build community of buyers selling products to the highest bidder 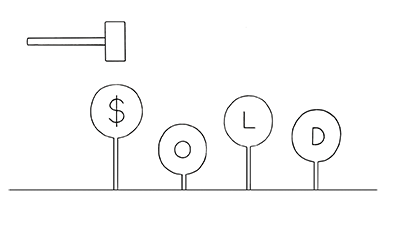 How: In an auction, the final price is achieved when a particular end-time is reached or when no higher offers have been received. The business facilitating the auction typically profits through a commission.

Why: The seller benefits from the opportunity to quickly obtain a price close to the true market value of a good with the help of competition among buyers.

The Auction business model operates on the principle of participative pricing, whereby the price of a product or service is not solely determined by the vendor, but is influenced by the active bidding of potential buyers. This process begins when a potential buyer offers a certain bid, based on their willingness to pay for the product or service. At the end of the auction, the buyer who has submitted the highest bid is expected to purchase the item or service.

From the perspective of buyers, the biggest advantage of this model is that they are able to control their spending, ensuring that they never pay more than they can afford or are willing to pay. For vendors, the advantage lies in the ability to allocate their products or services more efficiently across the market, particularly in cases where the demand for rare or heterogeneous items is difficult to determine and no reference prices exist. To protect against the possibility of being required to sell their products or services below an acceptable threshold, it is common for vendors to set a reservation price, which serves as a minimum selling price for the item or service until the auction has ended.

Where did the Auction business model pattern originate from?

Auctions have a long and storied history, with evidence of the business model dating back to Ancient Babylon, where women were auctioned off as brides. In modern times, the proliferation of auction houses has popularized the practice, with Sotheby’s serving as one of the oldest and most renowned such institutions. Founded in London in 1744 by bookseller Samuel Baker, Sotheby’s conducted its first auction in March of that year with the aim of liquidating several hundred valuable books at a profit. Over time, the company expanded to include the auctioning of medals, coins, and prints.

The advent of the internet has greatly impacted the auction industry, making it possible for auctions to take place without the constraints of physical space and allowing for a wider audience to participate. eBay, one of the pioneers in online auctions, has enabled individuals and businesses to sell a diverse array of goods and services to a global audience. On the platform, vendors create a page for the product they wish to auction, and interested buyers can place bids. Since its inception in 1995, over two billion auctions have occurred on eBay, cementing its status as the world’s largest auction house.

The appeal of the Auction pattern lies in its versatility and the numerous ways in which it can be implemented. The model can be utilized to sell one’s own products or can be expanded to create a marketplace for buyers and sellers of a wide range of products (think eBay) or those within a particular niche. The Auction business model is highly scalable and capable of serving millions of users around the clock, with users benefiting from the network effect created by this scenario.

The Auction pattern is particularly effective for the transparent sale of standard products such as C-parts or raw materials, as well as for the sale of highly specialized products provided that the auction site attracts sufficient traffic. Its flexibility and potential make it a valuable tool for businesses of all kinds.

When an ad is eligible to appear in search results, an auction determines which ads to show and in what order.