Exchange goods with customers without a monetary transaction 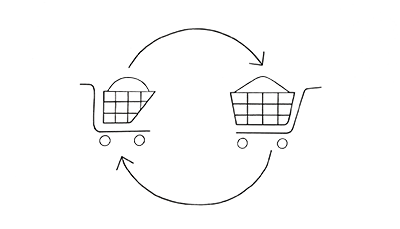 How: In return for a product, provide something different than money, but of value, to the receiving party.

Why: In a barter exchange, the value of the transaction is valued differently by each party, opening up the potential for higher monetary capitalization for both.

The practice of bartering involves the exchange of goods or services between individuals or organizations, without the use of money as a medium of exchange. This system of trade differs from sponsorship, in that it actively engages external parties in the value creation process, rather than merely providing financial support or promotion.

One example of this can be seen in the efforts of tech giant Google, which offers free directory assistance as a means of improving its voice recognition technology. The pharmaceutical industry also frequently employs bartering as a means of conducting clinical trials, by providing drugs at no cost to doctors and hospitals that administer them to patients.

In addition to serving as a means of gaining valuable insights or resources, bartering can also be an effective strategy for introducing a brand to new customers. This approach is commonly utilized in the marketing of baby food, as new parents are often unfamiliar with these products prior to the arrival of their child. By offering free samples of baby food, brands can familiarize new parents with their products and potentially gain their loyalty as customers.

Where did the Barter business model pattern originate from?

Bartering, the exchange of goods or services without the use of money, has a long history dating back to ancient civilizations. In ancient Rome, individuals or institutions were often supported through non-financial means, such as gifts or favors, a practice known as patronage. This concept was popularized by Gaius Cilnius Maecenas, a political advisor to Emperor Augustus, who used his gifts to further his own agendas.

The bartering system developed from this principle and has gained widespread usage in professional circles since the 1960s. Initially used as a means of providing financial and public support to organizations and sports clubs, bartering has evolved into a full-fledged business model in the 21st century, with many companies incorporating it into their value creation strategies.

Bartering can be a highly beneficial practice for businesses with complementary partners. These partners may include suppliers, customers, competitors, or even companies in unrelated industries. In fact, the most successful bartering arrangements may involve the most unlikely of partners. For example, pairing a subscription to a luxury sock company with a loyalty program for a major airline, or offering a subscription to a newspaper in exchange for a product or service.

Only by being open to thinking creatively and exploring partnerships outside of their typical spheres of influence, businesses can fully capitalize on the potential of bartering.

Through the Miles&More program, collected miles can be exchanged for upgrades, benefits, rentals or physical goods.

The food and beverage company, became the first foreign product to be sold in the Soviet Union through a barter agreement in which it offered its Pepsi-Cola drink in exchange for the exportation rights of Stolichnaya vodka to America. This deal not only allowed for the expansion of Pepsi-Cola’s availability and brand exposure, but also granted the company exclusive sales rights for Stolichnaya in the US.

The hotel management and development company frequently uses bartering in its business functions. The company offers room nights and meeting spaces in exchange for goods such as TVs and laptops, as well as services like advertising or construction work. This allows Magnolia to reduce its overhead costs for products and services, particularly during the off-peak season.

The online marketplace that allows users to trade items with one another rather than using money.