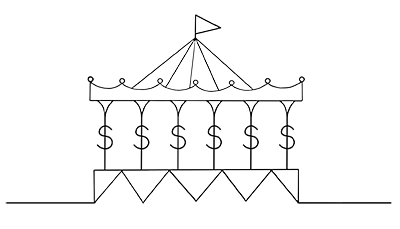 How: Work together with complementing stakeholders or even rivals to create additional profits that are shared among partners participating in the extended value creation.

Why: Where one party benefits from an increased value for its customer base, the other party is able to put its skills or assets to use in new ways or to a new market.

The Revenue Sharing model is a symbiotic agreement between individuals, groups, or companies to share resulting revenues. This model is often associated with affiliate schemes, where an operator refers customers to a business and receives payment for clicks, with both parties benefiting from the increased customer base and revenue.

Revenue Sharing can assist in building strategic partnerships that broaden a company’s customer base, increase its income, and strengthen its competitiveness. It can also serve as a means to lower distribution costs and share risks with other stakeholders.

For the Revenue Sharing pattern to work, one party must increase revenues and share them with another party in exchange for their participation, resulting in a mutually beneficial relationship. This approach encourages customers to upload content to the internet, and in return, receive a share of the advertising revenue based on the number of ad banner impressions or clicks associated with the content.

Where did the Revenue Sharing business model pattern originate from?

Evidence of Revenue Sharing can be found as early as Venice’s commercial expansion around 810 bce. Two partners formed a so-called commenda contract to cooperate in selling goods. The two parties usually comprised a merchant domiciled in Venice who acted as creditor and a travelling merchant who transported goods between ports. Both risk and Revenue Sharing were contractually defined, with the creditor taking on the credit risk and the travelling merchant investing his labor. If the business was profitable, proceeds were split in the ratio of 3:1 between the creditor and the debtor respectively.

The Birth of Profit Sharing in France

The first experiment of Revenue Sharing in France came about in 1820 when the French National Insurance Company started using a share of profits as part of its payment to its workforce. Numerous companies in various industries began to adopt profit sharing as well. Based on the ideas of philosophers John Stuart Mill and Robert Hartman, the concepts of revenue and profit sharing spread.

Hartman recognized that Revenue Sharing would help employees to feel more connected to and identify with their employer. The greater motivation engendered would in turn increase profits. This concept has been widely adopted and continues to be a popular business model to this day.

As value chains have become more fragmented, open, and interdependent, the importance of the Revenue Sharing business model has increased. Regardless of the industry, B2B or B2C, the benefits of sharing risks through strategic alliances can be realized.

There are several types of revenue sharing business models that are typically implemented, and the basis on which revenue is shared between parties can vary depending on the specific model. Some examples include:

Revenue sharing can be an effective marketing strategy when executed correctly.

Revenue sharing can be used as an incentive for partners to help companies build their brand and business. This is done by distributing revenue every time someone recommends a new client or customer. This allows businesses to form strategic alliances and partnerships with external stakeholders.

Adopting this kind of strategy can be fairly cost-effective. Not only does it create an incentive for partners to channel more business toward a company, but it also cuts back on certain expenses. Since these are partnerships, companies don’t have to spend on wages, benefits, or other costs related to employing workers.

Companies that use revenue sharing should ensure that the terms and conditions of this business model are clearly laid out in a written contract. They should also make sure that these partnerships lay down the foundations for exclusivity. After all, companies don’t want their alliances to stray and funnel business to their competition.

Revenue sharing distributes revenue and losses among those involved in the business model. This means that all parties are responsible for losses and share in the revenue generated.

The music streaming service keeps 30% of the revenue it generates and splits the remaining amount between artists.

For every booking, the home sharing marketplace receives 6–12% of the booking fee from the guest and 3% from the host.

n 1994, brothers Jason and Matthew Olim founded CDnow, an e-commerce website offering a wide range of CDs, films, and videos to music enthusiasts. Three months after the company was established, they instituted the Buy Web program, the first application of what we now know as ‘affiliate’ or ‘associate’ marketing. To encourage partners to create links on CDnow, the company entered into Revenue Sharing contracts with them, whereby the partner received 3% of sales of products purchased via affiliate links to CDnow. This method proved to be highly effective in attracting partners.

Apple applies Revenue Sharing in both its App Store and iTunes Store. Developers program their own applications and upload them to the App Store free of charge or at prices set by them. Once reviewed and approved, these apps are published on the App Store, with Apple receiving a third of the revenue. A similar principle is applied in the iTunes Store, where the incoming revenue from every track downloaded is shared among Apple and the band or label in a 2:1 ratio.

HubPages is a social platform for user-generated content, where writers can share articles in various categories and earn revenue through clickable advertisements placed on their pages. The website generates income through revenue sharing, becoming one of the 50 most visited websites in the US.

Spotify operates on a revenue share model with artists and record labels, paying them a percentage of the revenue generated from streams of their music. This has helped the company secure a large catalog of music and attract more listeners to its platform.

YouTube uses a revenue share model with content creators, paying them a percentage of the revenue generated from ads played on their videos. This has led to a large and diverse community of creators, and a wide variety of content for viewers to enjoy.

Amazon has a revenue share model for its self-publishing service, Kindle Direct Publishing. This allows authors to earn a percentage of the revenue generated from the sale of their books. This has helped Amazon to attract a large number of independent authors, leading to a diverse selection of books for readers.