Increase usage efficiency by sharing assets among a group 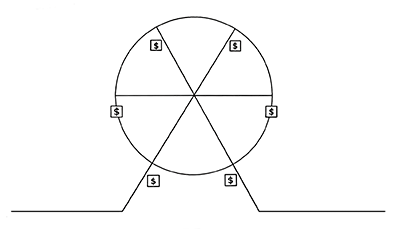 How: Let customers share assets – typically capital intensive – with a group of owners, and provide occasional access at a fraction of the full price.

Why: Customers obtain the rights of being an owner without having to provide all the capital alone.

Fractional Ownership is a concept that allows customers to purchase a portion of an asset rather than the entire thing. This means that customers only need to pay a fraction of the full price, giving them the opportunity to acquire products or services that may have been out of their price range otherwise.

Fractional Ownership is usually implemented through the creation of an association. Each buyer is given a certain amount of access to the asset based on their percentage of ownership. A company is typically responsible for managing the asset and enforcing the rules and regulations of the association. This company profits from Fractional Ownership because it allows them to sell the asset to a larger number of customers, as the price is divided into smaller shares. Additionally, Fractional Ownership can be especially beneficial when applied to capital-intensive assets, which may not be as appealing to a large customer base.

Where did the Fractional Ownership business model pattern originate from?

The concept of Fractional Ownership has roots in communist ideology and the practice of collective farming in early 20th century Russia. However, it was not until the 1960s that this business model was adopted in the private sector by companies such as NetJets.

NetJets is credited with pioneering the concept of fractional ownership of aircraft. Customers purchase a fraction of an aircraft and are entitled to a certain number of flight hours. The beauty of this system is that customers are not limited to a specific aircraft type, but rather have access to any of the company’s 800+ planes worldwide. This allows NetJets to guarantee its customers an available aircraft within 24 hours, similar to the experience of owning a private plane outright. By introducing this business model, NetJets was able to create a new market segment in the realm of private aviation.

Fractional Ownership is an effective business model in industries where customers are willing to share assets. It becomes particularly viable and appealing as the value of the asset increases. Traditionally, this model has been used in the aircraft and real estate industries.

By implementing a Fractional Ownership model, businesses have the opportunity to reach a larger pool of customers and gain new ones who may not have been able to afford their product or service otherwise. This is because the cost of the asset is divided into smaller shares, making it more accessible to a wider range of people.

By turning monthly rent into a down payment, Divvy helps families gradually build up ownership as they live in their home.

Multiple customers own shares in the same aircraft, letting them “own” a personal aircraft at a fraction of the cost.

Car sharing is a form of Fractional Ownership that allows individuals to share the use of a vehicle. This can be more efficient and enables people to access private transportation without needing to own a car. Operating on a short-term leasing model, with card-carrying customers paying a fee for membership and covering the costs of fuel and insurance. The company recoups initial capital and running costs through ongoing rental fees.

An international supercar club offering Fractional Ownership services for high-end luxury cars. Customers purchase shares of a luxury car, which entitles them to use it by the week.