Lock customers into your product via technology or product dependencies 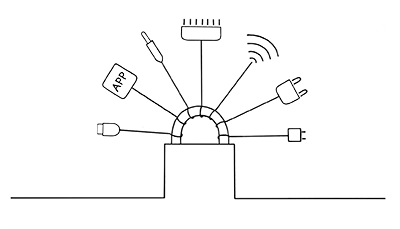 How: The lock-in effect is typically a result of standards controlled by the vendor and can grant the vendor some degree of monopoly power and increased profitability over the default situation.

Why: By locking into a vendor's ecosystem of products and services, customers will incur such high switching costs that loyalty is effectively forced through constrained choices.

In this business model, customers are effectively trapped within a vendor’s ecosystem of products and services, as changing to another provider would entail significant costs or penalties. It is worth noting that these costs are not limited to financial considerations; the time and effort required to adapt to a new option and learn how to use it may also be relevant to customers.

There are various methods by which vendors can keep customers tied to their company. For instance, customers may need to invest in new technologies such as a new operating system, or they may be required to work with a particular insurance salesperson who has a long-standing relationship with them.

The primary objective for the vendor is to prevent any interoperability between their offerings and those of their competitors, thus ensuring that customers remain reliant on the company, brand, or supplier, and fostering loyalty and repeat purchases.

Due to past purchases, customers may find that their future decisions and flexibility are constrained. Although aware of switching costs, companies often struggle to manage and evaluate them accurately. To persuade customers to continue purchasing their products, the lock-in concept may be combined with other strategies, such as the razor and blade model.

There are various forms of the Lock-in business model pattern. For example, contracts that mandate the use of a specific supplier are a clear example of the pattern. Another common form is invested assets that necessitate further purchases from the same supplier. This dependency is often established through technological restrictions such as compatibility or patents, which may be a crucial aspect of the lock-in concept.

Ties can also be created through the simple act of purchasing additional accessory products from a manufacturer, as customers will not be able to recoup past investments if they choose to switch. Additionally, switching costs can arise from the training and classes offered by a particular provider that are required to use their products.

Why should you apply the Lock-in business model?

The goal of ‘lock-in’ is to create a barrier for customers to switch from your brand or offering to a competitor’s offering. It can achieve this through a combination of increasing switching costs or the effort required to transfer (soft lock-in) and positive reasons to stay, such as a superior brand experience or incentives.

In an article entitled “Coordination and Lock-in” by Farrell and Kemperer, the authors explain the role of lock-in in preventing customers from changing suppliers in response to changes in efficiency, thus extending customer lifetime value and facilitating the building of a direct, one-on-one relationship with the audience.

Lock-in also provides an opportunity to identify potential new, uncontested marketplaces within your sector that you could explore and enter.

Where did the Lock-in business model pattern originate from?

Origins of the Lock-in Pattern It is difficult to trace the exact origin of the lock-in pattern due to its numerous variations. However, contracts containing legally binding obligations have been common practice since at least the 6th century in the Roman Empire. Other lock-in variants, such as training requirements or technical mechanisms, may also have a long history.

The saying “keeping existing customers is cheaper than acquiring new ones” forms the foundation of the Lock-in business model. There are three primary ways in which Lock-in can be implemented:

For example, users who want to leave iTunes will lose their investment in previously purchased music. Financial rewards for cumulative purchases are a common lock-in method, but more sophisticated mechanisms can be created by combining lock-in with patterns such as the Bait and Hook model or Flat Rate pricing.

To be effective, a Lock-in strategy must take several factors into account:

Various creative lock-in strategies have been used to lock in customers in competitive segments:

As software became more important than hardware, IBM lost to Microsoft, who locked customers into their operating system.

Employs Lock-in business model by selling disposable blades that only match its handles, and securing patents that prevent other companies from entering the market with accessory products. The disposable blades (consumables) generate recurring revenue with high margins, offsetting losses from initial low-priced offer of the handle.

Danish manufacturer of a small brick-based toy system comprising interlocking parts adopts the Lock-in business model by designing its products and accessories to work only with other compatible components of its patented design. Customers must purchase Lego-compatible products, increasing customer retention and revenue for the company.

Employs Lock-in business models by taking out patents for mounting mechanisms used for interchangeable lenses. Once customers choose a particular camera body, they must return to the same manufacturer for additional parts. Pressure to set a new standard eventually mounts and results in standardised bayonet mounts.