Facilitate or fund small loans with relaxed requirements for collateral 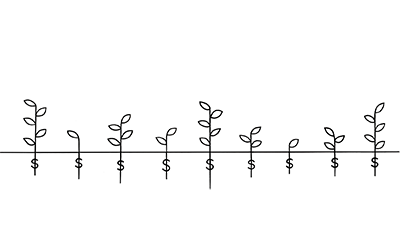 How: Deliver financial services to individual small businesses or groups of entrepreneurs lacking access to banking and related services.

Why: Microfinancing can help mobilize an underserved crowd.

Microfinance refers to the provision of financial services such as small loans, insurance, and savings to individuals and businesses who may not have access to traditional sources of financing. These services are typically aimed at assisting low-income earners and entrepreneurs in less developed countries to improve their economic circumstances.

One of the chief functions of many microfinance organizations is the offering of microloans, also known as microcredit. These loans, which can range from a few hundred dollars to a few thousand, are meant to provide necessary funding to those who may have difficulty obtaining it from traditional financial institutions. While the interest rates on microloans may be higher than average, they can still serve as a valuable resource for those in need.

While some microfinance institutions are nonprofit organizations, an increasing trend has been the emergence of profit-seeking MFIs that aim to generate solid returns for investors. Even major banks such as Citigroup have entered the microfinance sector.

Microfinance has the potential to promote economic growth, financial inclusion, and prosperity in less developed countries. By providing small amounts of financing to individuals and businesses that may not have access to other sources of funding, microfinance can help to stimulate economic activity and drive development. Additionally, by offering financial services such as insurance and savings, microfinance institutions can help to build financial literacy and stability in underserved communities.

There are many microfinance organizations that have emerged in recent years to facilitate and organize this form of lending and provide financial services to underserved communities.

Despite some challenges and controversies, microfinance continues to be hailed as a powerful tool for promoting economic growth and financial inclusion.

From micro loans to micro savings

In addition to providing microloans, microfinance institutions also offer a range of other financial services. These may include microsavings accounts, which allow individuals to deposit small amounts of money without minimum balance requirements, as well as microinsurance products covering a range of needs, from crop insurance to life insurance.

Where did the Microfinance business model pattern originate from?

Microfinance is not a new concept, with small-scale operations dating back to the 18th century. The first recorded instance of microlending is attributed to the Irish Loan Fund system, which was established in the 18th century by Jonathan Swift to help impoverished Irish citizens. In its modern form, microfinance gained widespread popularity in the 1970s.

There are a wide variety of microfinance organizations operating around the world, including some that work closely with the World Bank and others that are smaller and operate in specific countries. Some organizations allow lenders to choose which borrowers to support based on factors such as level of poverty, geographic region, and type of small business, while others focus on specific groups or areas of impact, such as providing capital to women in Uganda for eggplant farming or small cafes. Some microfinance organizations also prioritize initiatives that benefit the community as a whole, such as education, job training, and environmental improvement.

For profit vs non-profit

Although there are countless heartwarming success stories from micro-entrepreneurs who have used microfinance to start businesses, microfinance has sometimes been met with criticism. While microfinance interest rates are typically lower than those of traditional banks, some have charged that these operations are profiting from the poor, particularly with the rise of for-profit microfinance institutions like BancoSol in Bolivia and SKS, which started as a nonprofit organization but became for-profit in 2003.

One notable example of this is Mexico’s Compartamos Banco, which was originally established as a nonprofit in 1990, but was transformed into a traditional, for-profit company a decade later. In 2007, it went public on the Mexican Stock Exchange, raising over $400 million in its initial public offering. Like most other microfinance companies, Compartamos Banco makes small loans and serves a largely female clientele, grouping borrowers together. However, the main difference lies in how it uses the funds it generates from interest and repayments - as a public company, it distributes them to shareholders, whereas nonprofit institutions use profits to expand their reach and create more programs.

The immediate concern is that, driven by a desire to make money, these large microfinance banks may charge higher interest rates that could create a debt trap for low-income borrowers.

However, there is also a more fundamental concern that the incentive for microcredit should be poverty alleviation, not profit. Publicly-traded firms, which are obligated to their shareholders, may work against the original mission of microfinance, prioritizing helping the poor above all else.

In response, for-profit microfinanciers like Compartamos argue that commercialization allows them to operate more efficiently and attract more capital by appealing to profit-seeking investors. By becoming profitable, they claim, a microfinance bank can extend its reach and provide more money and loans to low-income applicants. At present, both charitable and commercialized microfinanciers coexist.

Once educated, customers can apply for loans. The process is similar to that at a traditional bank, with a loan officer helping with applications, overseeing the lending process, and approving loans. These loans can be as small as $100 and may be sufficient to start a business or engage in other profitable activities for impoverished individuals.

Bangladeshi and Nobel Peace Prize-winning pioneer of micro-banking lending over $20 billion to more than 9 million borrowers.