Skip the intermediary and deliver directly to customers 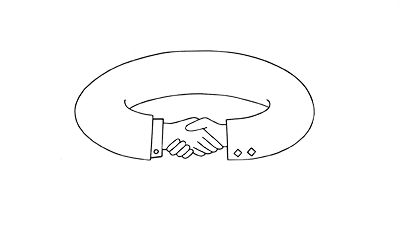 How: Bypass the traditional sales channel to target end-users directly. Sell door-to-door, through company-owned stores, or through an online web shop.

Why: Skip retail margin and any additional costs associated with intermediates by selling directly from provider to consumer

In the No Middle Man business model, a company dispenses with intermediaries and makes its products and services available directly from the manufacturer. By doing so, the company is able to circumvent the expense and inefficiencies of retail profit margins and other costs. These savings can then be passed on to the customer, creating a mutually beneficial outcome for both parties.

Not only does this model yield financial advantages, it also facilitates a more personal and intimate sales experience with customers. This allows the company to better comprehend their needs and preferences, which can in turn inspire new ideas for product and service improvement.

Moreover, the No Middle Man business model grants companies a higher degree of accuracy and control over sales information. This enables them to maintain a consistent and uniform distribution system, thereby ensuring that customers receive prompt and effective service. This is particularly beneficial when dealing with products and services that require comprehensive explanations.

Where did the No Middle Man business model pattern originate from?

The No Middle Man model of distribution is one of the oldest forms of commercial enterprise. In days of yore, artisans and farmers relied almost exclusively on this method to sell their wares at markets and roadside stalls. However, in the modern era, there has been a proliferation of new and imaginative ways of applying this model, giving rise to a plethora of exciting business innovations.

One such innovation is the concept of the Tupperware party, introduced by the subsidiary company Tupperware Brands Corporation. By organizing sales events in the homes of its current and potential customers, Tupperware is able to dispense with retailers and sidestep the costs of advertising. This concept was first implemented by Brownie Wise, who went on to become the first woman to grace the cover of BusinessWeek magazine.

Another prime example of the No Middle Man model in action is the construction company Hilti. Specializing in anchoring systems and headquartered in Liechtenstein, Hilti is one of the most successful B2B direct vendors in the construction industry. This success is due in no small measure to the company’s emphasis on close relationships with customers, with three-quarters of its employees engaged in sales and interacting with customers on a daily basis.

According to Michael Hilti, the No Middle Man principle was the main success factor in the company’s sustained success. While proximity to the market may entail certain costs, it ensures that customers receive exactly what they want.

The No Middle Man model allows for precise control over the entire sales process. This serves a dual purpose:

Reintermediation - putting the middle man back in

As technology advances and new players enter the market, the traditional Middle Men (intermediaries) in certain industries may be disrupted. This process, known as disintermediation, can lead to the removal of intermediaries from the supply chain and a direct relationship between the producer and consumer. However, the market may also adjust and new intermediaries may arise, a phenomenon known as reintermediation.

An example of this process can be observed in the advertising industry, where companies like Google and Facebook disintermediated the traditional advertising industry. However, as the market adjusted to this new industry, old players adapted and new players emerged. For instance, ad agencies transformed into digital marketing agencies, and consultancy companies born as a result of the SEO/SEM and SMO/SMM industries.

Reintermediation highlights the dynamic nature of the business world and the importance of being able to adapt and evolve in order to survive. The dream of disintermediation may transform into something else, as the market adjusts and new intermediaries are created to fill the void left by the removal of old players.

Companies like Google and Facebook have disrupted traditional intermediaries in the advertising industry. However, as Google has expanded to cover a variety of verticals, it has also begun to roll out products that offer an end-to-end experience within its platform, potentially disintermediating the digital disintermediators.

The emergence of super gatekeepers has become increasingly apparent as these intermediaries have begun to extend their reach, covering more and more aspects of the user experience. This has resulted in a potential for the rise of gatekeepers that are more powerful than ever before.

In a world dominated by tech giants who control the digital distribution pipelines, small businesses may need to pass through these gatekeepers in order to reach key customers. These gatekeepers may act as enablers or deterrents for small businesses. The gatekeeper hypothesis suggests that this new era of blocked distribution is different from the past in that algorithms define the rules, the focus is on customer experience, and consolidation and asymmetry dominate the market with few large players controlling the intermediaries.

Blockchain and the Renewed Dream of Decentralization

Blockchain technology is offering renewed hope for the dream of decentralized systems at scale. While the exact trajectory of its development remains uncertain, it is thought that it has the potential to lead to the creation of a new form of organization. This could manifest as a super, decentralized company, made up of many smaller entities united by a shared protocol.

Unbundling: A precursor to Disintermediation - cutting out the middle man

Unbundling, as a business strategy, involves breaking down a series of products or elements within a value chain to provide enhanced value by eliminating the less valuable portions while retaining the most valuable components. Many companies that dominate new spaces began as unbundlers, offering only the most valuable part of an existing experience and riding the wave of larger incumbents.

As these companies continue to grow, they often consolidate their distribution to provide an end-to-end experience and gain more control over the customer journey. However, as the market matures, new companies with a different mindset may gain traction by unbundling the experience offered by the incumbents.

Decoupling: What comes after disinteermediation - cutting ou the middle man

Decoupling is the third wave of disruption, identified by Harvard professor Thales Teixeira, which takes place from 2006 onward.

It is defined as companies breaking apart the customer value chain, in order to deliver only the most valuable aspect of it, without bearing the costs to sustain the whole value chain. The goal of decoupling is to create a new experience for customers, one that is based on convenience, time, effort and cost. By breaking apart the customer value chain and focusing on the most valuable aspect, companies can provide a more convenient and cost-effective service.

Bypassing retail by selling and marketing directly to consumers online, the firm disrupted the market for shaving products.

By eschewing the traditional card dealership model and selling directly to consumers, the gross profit was raised by 30%.

With its network of stores across the world and subsidization of the iPhone from mobile carriers, has managed to build its own distribution pipeline, with most of its sales coming from indirect channels.

Founded in 1984, Dell began as a direct seller with a mail-order system and shifted online, offering deeply discounted and highly customizable machines while its competitors sold pre-configured computers in retail stores.

A two-sided marketplace that connects drivers and riders, enabling passengers to connect with drivers directly via an app, it’s a major disrupter of the taxicab industry and an example of how removing the middleman can transform industries where regulations make it difficult for new entrants to succeed.

By organizing sales events in the homes of its current and potential customers, Tupperware is able to dispense with retailers and sidestep the costs of advertising.