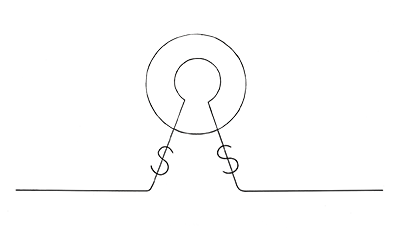 How: Make your source code or product blueprint freely accessible for anyone under an Open Source licence. Let everyone contribute to the design and use it for free.

Why: Besides helping to open up a large user base, the collaborative production model of Open Source can help widen human capital invested and in turn help increase diversity of ideas and surface better solutions than if you were on your own.

Open Source refers to a development model in which products are created and maintained by a public community, rather than by a single company. The source code for these products is publicly accessible, enabling anyone with the appropriate skills and interest to contribute to the development and improvement of the software. As a result, the solutions developed through this process belong to the public at large, rather than to any single organization. Open Source products are also typically freely available for anyone to use, modify, and distribute.

Where did the Open Source business model pattern originate from?

Open Source development has its roots in the software industry, with its earliest known use dating back to the 1950s at IBM. Following the introduction of the first IBM computers, a user group known as Share was formed to facilitate the exchange of technical information among programmers, operating system developers, and database experts. This early form of community-driven development laid the foundation for the modern Open Source movement.

The Emergence of Open Source in the Browser Market

In the 1990s, Open Source development experienced a resurgence with the Netscape Communications Corporation’s efforts to develop an alternative browser to compete with Microsoft’s Internet Explorer. This marked the beginning of the Mozilla Open Source project, which ultimately led to the development of the popular Firefox browser. This experience demonstrated the potential of Open Source to create value in the software industry and paved the way for its continued growth and adoption.

Over the years, Open Source Software (OSS) has become an integral part of the software industry. One of the first companies to establish a profitable business model based on Open Source was Red Hat, which generated most of its revenues through the sale of service agreements and complementary software applications for the Linux operating system. Red Hat’s success helped to pave the way for other companies to generate significant revenues from Open Source products, and serves as a testimony of the viability of open source business model.

Open Source development has found wide application in the realm of software design. By embracing an Open Source development model, organizations can relinquish a significant degree of control over a given project, but in return gain a competitive advantage through the setting of standards, the sharing of resources and risks, and the creation of a community of users to whom they can later sell additional commercial products or services.

Despite the availability of Open Source software at no cost, there are opportunities for income generation through business models that build upon an Open Source foundation. Rather than earning revenues directly from the software, companies may offer paid support, consulting services, or additional products or services that leverage the functionality of the Open Source software. This allows organizations to derive indirect returns while still maintaining the freedom and accessibility of the underlying software.

The biggest challenge with Open Source as a business model is not creating value, but capturing it. When designing an Open Source business model, it is important to ensure that at least some of the created value remains with the originating company.

There are a number of different opportunities for income generation using the Open Source model, including:

The future of Open Source

As the Open Source becomes more prevalent across industries, it continues to gain acceptance as a viable approach to software development, delivering an array of benefits such as cost-effectiveness, collaboration and community, and flexibility. The wide range of uses and the increasing number of projects and companies adopting Open Source, have made it a fundamental part of software industry.

The free-to-install content management system software is also available as a paid subscription service on Wordpress.com.

The online encyclopedia, launched in 2001, has become the world’s most widely used reference work. Articles are written and edited by a global community of users and the platform is sustained through donations. Through its Open Source model, Wikipedia has disrupted the traditional encyclopedia market and forced established publishers to adapt their business models.

The Swiss company operates as the world’s first Open Source biotechnology firm. Its mission is to identify compounds for the treatment of rare diseases, known as ‘orphan diseases’. Instead of laboratory research, the company screens existing research results and information for potential compounds, which is a more efficient and cost-effective method. Just 11 years after launch, the company has developed a pipeline of over 300 active substances, 6 of which have achieved orphan drug status.

Launnched in 2008, it is the first Open Source car maker. It operates on an open design network, allowing engineers worldwide to contribute ideas and collaborate on car development on its online platform. Their first car, the Rally Fighter, was developed and produced using this model, and while only 150 units have been sold, Local Motors reached its break-even point barely two years after launch.