Outsource specific tasks to the crowd 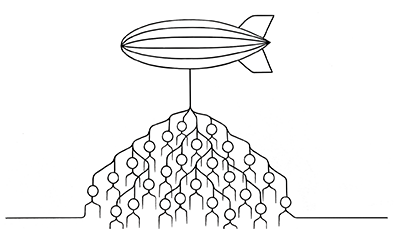 How: Solicit contributions for specific tasks from an undefined public through external communities, rather than from employees or contracted suppliers. Build positive relationships by interacting with customers to subsequently help increase sales.

Why: Tap into a diversity of skills and amount of labour you don’t possess with significantly less cost and risk than making additional hires. With crowdsourcing, you pay for the solutions, not the effort – the marketplace bears the cost of failure, not you.

Crowdsourcing refers to the act of outsourcing tasks to a diverse group of external individuals or organizations, who are invited to participate through an open call. The goal of crowdsourcing is to tap into a larger pool of ideas and knowledge, potentially leading to the development of more cost-effective and innovative solutions.

Tasks that may be suitable for crowdsourcing include generating new ideas or solving specific problems, as well as gathering insights into customer preferences for future products. Incentives for participating in crowdsourcing endeavors can be both extrinsic, such as financial rewards, and intrinsic, such as loyalty to the company or personal interest in the subject matter.

Where did the Crowdsourcing business model pattern originate from?

Despite being coined relatively recently in 2006 by Jeff Howe of Wired, the concept of crowdsourcing has a rich history dating back to the 18th century. A notable example can be found in the British Longitude Act of 1714, in which the government offered a substantial reward to anyone who could devise a practical method for determining a ship’s exact longitude. At the time, navigators were able to determine their latitude with a compass, but no equivalent method existed for longitude, leading to perilous voyages and the need for circuitous detours. It wasn’t until 1773 that Englishman John Harrison received the prize for his marine chronometer, which finally solved the longitude problem.

While the modern form of crowdsourcing differs significantly from its early iteration, the basic idea remains the same: seeking solutions to challenges or problems from a large, dispersed group of individuals. In the past, such challenges were primarily advertised through word of mouth or in newspapers, limiting their reach. Today, however, the internet has allowed for the widespread advertisement of assignments, exponentially increasing their potential audience.

Crowdsourcing can be a valuable tool for companies seeking to generate new ideas during the ideation phase.

Organizations that have historically been unable to cultivate innovative thinking internally might not find the crowdsourcing approach suitable for them. On the other hand, companies that are already innovative can benefit greatly from crowdsourcing, leveraging the collective intelligence of the crowd to further augment their own innovation potential and deepening their connection with customers through inclusion in the ideation process. This can also lead to increased brand loyalty among customers.

The market for crowdsourcing platform providers is vast and diverse, with a proliferation of specialized providers emerging over time. However, the competitive landscape can be unforgiving, and only a few providers are able to maintain their edge in the long run.

Crowdsourcing has also been seen used as an idea validation method, obtaining input to a research project from a large group of undefined people. By soliciting contributions from an undefined public through external communities, rather than from existing employees or specific pre-contracted suppliers, Crowdsourcing can help decrease risk by increasing attempts.

Its users learn a language for free while helping to translate the web as a by-product.

An online company that invites designers from around the world to submit T-shirt designs to its platform. Customers then vote on their favorite designs, and Threadless produces and markets the highest-rated shirts. The designers are financially rewarded for their work if it is chosen for production or if it is reprinted or wins a competition. This approach allows Threadless to offer three to four new T-shirts per week that generally sell well.

A US-based company that has grown significantly through acquisitions and a strong track record of innovation. As part of its Open Innovation strategy, Cisco regularly utilizes crowdsourcing through competitions like its I-Prize, in which people are invited to submit and present their innovation proposals online. The company’s senior management then selects the best idea, which is financed and put into practice, with the winner receiving a financial reward in exchange for transferring intellectual property rights.

Facing a crisis of stagnant revenues and rising research and development costs at the beginning of the 21st century, P&G introduced the Connect + Develop crowdsourcing program and increased the quota for external ideas used in product development from 15% to 50%. This involved creating a network of external partners to connect its 9,000 researchers with over 1.5 million scientists around the world. The Connect + Develop initiative allowed P&G’s research division to increase its productivity by over 60% within five years.

A crowdsourcing platform launched by pharmaceutical company Eli Lilly that specializes in finding solutions across a range of fields such as engineering, science, and business. Companies with research and development challenges (“solution seekers”) post details of their requirements on the InnoCentive platform and offer a financial reward in an effort to attract a global audience of solvers and acquire the intellectual property rights for the chosen idea or solution. The “crowd” primarily consists of top-class experts who submit their suggestions to the platform for free. InnoCentive typically receives revenues of $2,000 to $20,000 from companies for posting various challenges on the platform, but prizes of up to $1 million have also been offered. This model allows companies to reduce their R&D budget by tapping into a global network of experts, while solvers benefit from the financial prize.

A company that operates a platform for crowdsourcing software development, design, and data science. It connects businesses with a global community of freelance developers, designers, and data scientists who compete to deliver the best solutions. The platform also offers training, events, and other resources to help its community members improve their skills. TopCoder’s business model involves charging businesses a fee for using its platform and services, as well as taking a percentage of the prize money awarded to winners of its competitions.